Cousins David Asson of Sisters, Oregon and Gary Asson from Eagle, Idaho each share stories about their grandmother, Rosa Gabardi.  David’s story is documented in his book, “Forty Years to Idaho“, which he introduces below.  Gary’s story, “The Robust Life of Rosa Angela Gabardi-Carotta-Malench-Asson,” is presented after David’s story.

In “Forty Years to Idaho“, I tell how Rosa Gabardi and Fedele Asson of Val d’ Non, became our nonni and how Pierina Purin of Val Sugana married one of their sons and became my Mother.

Their stories reveal how happenstance and daring led here-to-fore strangers of strong individuality to a remarkable kinship.  I was blessed to grow up with them, to hear their stories, and to marvel at their ways.

My family story calls attention to the Trentini who settled in southern Idaho on the Minidoka Project.  President Theodore Roosevelt signed the Reclamation Act of 1902 that brought irrigation and a new way of life to thousands of acres and craving souls.

Grandfather Fedele spent his first years at the Cambria Coal Mine on the Wyoming – Dakota border near the ranch where “Teddy” became a westerner.  Fedele was a traveler, reader, and storyteller.  He strolled the living room in later life puffing on a long, ornate pipe, mimicking tales of his reading of Dante. 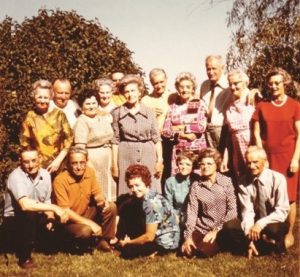 The twelve children and spouses of Rosa Gabardi and Fedele Asson circa 1970.

The industrial revolution was driving America.  Demand for energy was extreme and coal was the fuel of choice.  Railroads were extending their lines ever farther into the west, attracted by more and more new-found deposits of coal.

There was a great demand for immigrant laborers to remove coal from the ground and Colorado was riddled with new mines opening in the high country.  Rosa and Riccardo were drawn to the income provided by the mining of coal.

Regrettably, in 1896, Riccardo died somewhere in Colorado of a yet to be confirmed cause, but suspicion is that he may have been just another immigrant miner who fell victim to one of the many Colorado mining disasters during those years.

Rosa, 29 years of age at the time, with four children under the age of seven years, was suddenly a widow.  It is unknown how she managed to feed the children in those days preceding the Great Society.  Miners are known to have pooled funds to help widows and others in distress.  Presumably, Rosa and her family were beneficiaries of such organizations, but it had to be an enormous burden for a young immigrant mother of four.

Ultimately, Rosa was forced to make an unhappy and regrettable decision.  She sent two of her children (Lisa, seven years, the eldest of the children, and Elinda, the third child, only four years old) home to the village of Malgolo in Val d Non, to live and grow to adulthood with relatives.  The children presumably traveled to Malgolo with familiar adults known to Rosa.  Both girls returned to America later in life with husbands who they met and married in Val d Non.

Johnny, about five or six years of age, and his younger sister, Edith, about two years of age or younger remained with Rosa in Colorado.

It is a logical assumption that many immigrants to America met in mining camps and socialized with other immigrants from the ‘old country’, especially with those who spoke the same dialect, which in this case is Nones, commonly spoken yet today in the Val di Non of Italy.

Census records from Sunnyside, Carbon County, Utah dated 23 June 1900, confirm that Rosa, her children, her husband Daniele Malench, as well as Fedele “Joe” Asson, and other names known to this family, were in fact residents of Sunnyside, Utah.

Not long after, Daniele Malench disappeared from the scene.

Fedele “Joe” Asson and Rosa then became involved because of the separation of Rosa and Daniele, or, through assumption, may have been the cause of the breakup.  No one knows for certain.

From that point in time, the moves to other coal bearing areas continued for Joe Asson and Rosa Carotta Gabardi.  Joe accepted all three children as his own and the baby was raised with the surname of Asson.

This is a short story of a great woman, wife, mother, and matriarch of a proud family.  A woman who immigrated to America in 1888 at the age of twenty-one.

A young woman, who during the years would meet and marry three different men, all from la Val di Non, all born not more than five miles from her birth home, all three of whom she had probably never known back in Austria.

Rosa was born 15 December 1867 to parents Lorenzo Luigi Gabardi of Malgolo and Maria Maddalena Martini of Revo’.  Rosa was the eighth of ten children born to Lorenzo and Maria.  Rosa would live a full life and would give birth to twelve children.

Not much is known of her childhood.  Life was not easy in Malgolo during the mid to late 1800’s.  People of the area were finding it extremely difficult to support large families.   The opportunities of America beckoned to adventurous youth anxious to improve their lives.

We (those of us who are descendants and who have researched these facts) know that Rosa was not married at the time of her immigration.  We have no evidence of her date or port of arrival into the United States.  There is some suspicion that she may have first traveled to one of the South American countries and later to America.  Several Gabardi family members are known to have emigrated to South America.

Before leaving Austria, and during her teen years, Rosa may have been familiar with a young man named Riccardo Valentino Carotta, only a few months older than Rosa, born 29 September 1866 in Sanzeno, a village next door to Malgolo.  Riccardo apparently emigrated to America in 1884.  We know that Rosa and Riccardo eventually crossed paths and were ultimately married in in Park County, Colorado in 1888.

In a group photo of nineteen persons, thought to have been made in 1900 in Carbon County, Utah, Rosa and Daniele are clearly visible together with Rosa’s two children, Johnny and Edith Carotta.  Danielle Malench is holding a baby, David Malench, thought to be from 12 to 15 months of age at the time.  David was born to the couple 9 April 1899 in Castlegate, Carbon County, Utah (now a ghost town).

Census records confirm the existence of the family in Utah in 1900, in the town of Sunnyside, Carbon County, Utah.

Our family is of the assumption that the following photo may have been made in Sunnyside, or somewhere in Carbon County, Utah, in 1900. 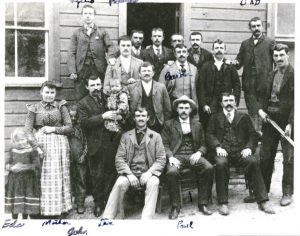 In the photo are fourteen men, all thought to be miners living in a boarding house operated by Rosa and Danielle.  Boarding houses were common in those years.  Many male immigrants were in country without wives and families and needed a place to sleep and eat.  It is our understanding that Rosa cooked for the boarders and probably washed their clothing.  Note that all those in the photo are nicely dressed, possibly for Easter Sunday, 15 April 1900.

Some of the men in the photo are Rosa’s brothers, Leopoldo Gabardi in the center front row with the hat and big mustache.  Fabiano ‘Frank’, directly behind and above the baby.  It was common for immigrants to America to write to folks in ‘the old country’ to influence them to also come to America.

By 1910, the family had moved to their final home in Rupert, Idaho.  The move to Idaho was prompted by the construction of the Minidoka Dam near Acequia, Idaho.

Construction of the dam began in 1904 as a product of the 1902 Reclamation Act, enacted by Congress and signed into Law by President Theodore Roosevelt.  The building of the dam brought the production of electricity to southern Idaho and provided irrigation water for thousands of acres of desert land.

People from all parts of America came to southern Idaho to acquire irrigable farm land which helped to feed the rapidly growing population of America, many of whom were immigrants or families of immigrants.

Descendants of Rosa Gabardi Carotta Malench Asson number in the hundreds, today.  Many have traveled to the Trentino Region of Northern Italy to visit distant relatives living in the villages of Malgolo, Amblar, Romeno, Fondo, and Don, all located in Val di Non, to enjoy the beauty of the area and the very hospitable nature and culture of the people.

“I have been to Italy on eight separate occasions and when entering the village of Amblar, I feel as if I am coming home.  I am grateful to be a descendant of such wonderfully, hard-working, hard-playing, good-living people.”