I grew up in Northern Italy in a small village named Revò. Our two-story house was built on the slopes of the Dolomite mountains and we stayed on the top floor. On the bottom floor lived two cows, which ended up being a blessing, because in 1941, we went to war.

I was six years old when WWII began, old enough to remember my father pinning up big wool blankets over the curtains. I remember lying in bed listening to the cows beneath us and the war planes above us buzzing and circling our village like hungry ravens. Of course, the blankets blocked out the light. I remember hearing the bombs drop on the nearby less fortunate villages that had somehow been spotted.

In the daytime we’d stand in the food rationing line. Whole families stood in line, one after another, babies crying with hungry bellies. The mothers held their tickets in sweaty hands, eager to get to the front of the line and see what food would be rationed to them that week.

It wasn’t much, bread and pasta mostly. If we got sugar it was brown, never white, which is why I said the cows were a blessing — they gave us milk. They helped us get by, but not by much. I dreamt of chocolates and sweets and I prayed for our lives a lot.

Then my father left. He left for so long we thought we’d never see him again. There was no way for him to call and when we finally got a letter three years later, it was half charred from a bombing. I remember his slanted handwriting and the photo he sent of himself. We passed that letter around again and again, each of us staring at his words in dismay. It seemed to be a letter from a ghost, but luckily he was alive.

At Christmas time we invited the soldiers into our small home to feast. German, American and Italian soldiers all sat together, eating and speaking in three different languages. I remember a German soldier taking out photos of his family and pointing out his wife, son and daughters to me. He didn’t know if he’d ever see them again. He started to cry big, soggy tears. We were all homesick. We all were scared.

By the time the war ended, I had spent almost half of my life living like this. War was how life was. I was eleven, and one by one my cousins and family returned from the war. Yet they were somehow changed. Many of the men worried constantly. They were paranoid, their minds just weren’t right. They’d wake up in the night screaming, drenched in sweat.

We were so glad to have another cousin come back alive because he was only 23. Then a few weeks after the war, he picked up what he thought was a pencil. It was a bomb. His body was blown to pieces all over the road.

After our village finally cleaned up after the war, my sister and I emigrated to New York to find work. I was 17 and she was 19. We both got jobs at a sweatshop in Brooklyn making men’s suits. We worked Monday through Friday, nine hours a day and five hours on Saturday. On Sundays we mostly rested, but sometimes we went out to the movies or visited other friends from Italy.

Living with my sister, Mami was fun. At first we lived with our cousin who was much older, but then we moved together into a one bedroom apartment. It was ten dollars a week for a kitchen, bed and bath. Mami and I shared everything, clothes, food, money. We trusted each other and depended on each other.

I always planned on returning to the beautiful village of Revò, Italy. Every day I worked and sent back money to my mother in Italy so one day I could go home. It was hard work, tedious and long. When I was 23 I decided it was finally time to go back.

Before I did, I decided I would visit Idaho where my father worked in the silver mines during the war. Traveling out West for the first time I remembered the great length of blue sky which I hadn’t seen in almost five years. The green mountains reminded me of Italy. During my short visit I met Dave (Fellin), Italian as well, who was a research scientist in Missoula Montana.

I went back to New York City instead of moving to Italy, but I could only think of those big, open skies, the Western land soft and alive and most of all, Dave. We wrote letters back and forth shyly declaring our love. Twice we spoke on the telephone. In February of 1958, he visited me in New York and asked me to come out West and be his wife. 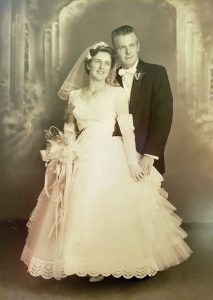 Nestled in the mountains of Missoula, Dave and I began a family of our own. Far removed from the war cries and factory days of my youth. Montana has become my home; a home like the country I grew up in. I am reminded of Italy as I look at Montana’s rural landscapes. Yet unlike the war years in Italy, Missoula holds only pleasant memories for me. 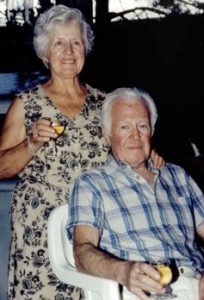 While I cherish many memories from the past, it is the warmth and love of my family that I will always carry in my heart.