Celebrating the Trentini Miners of the Silver Valley

In the Fall of 2016 I moved to Wallace, Idaho. Wallace is a rough-and-tumble little mining town (population 900) in the historic Silver Valley of the Idaho panhandle. Here I bought a 110-year-old brick building (a former dry goods store) and set up a comfy little apartment and writing studio on the second floor with my cat Primo. 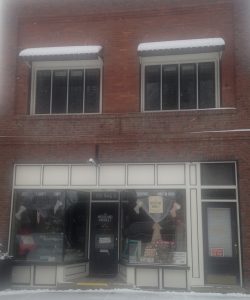 Since then, several friends and relatives have written politely to inquire if I am still of sound mind. They think the cheese has finally slid off Dan’s cracker. Why would anyone jump ship from beautiful cosmopolitan Seattle to a one-horse mining town like Wallace? But, honestly, I couldn’t be happier—and here’s why:

A Better Life in America

Wallace, Idaho represents such a fascinating chapter in the story of my family’s immigration from Italy and their hopes of a better life in America. In the early 1900’s many Italian immigrants landed in America with a dream in their heads but virtually no money in their pockets. Good-paying jobs for young, uneducated immigrants were few and far between. Fortunately, hundreds of Trentini were able to find work in the coal, lead and silver mines of Pennsylvania, Colorado and Idaho.

My grandparents — Fiore and Domenica Zadra — were among those adventurous souls. They both grew up in the little mountain village of Revo, Austria, a region that is now part of the Italian Tyrol. Tough times in that part of the world drove my grandfather to set out by himself for Ellis Island in 1900. Four years later he wrote home to his mother to arrange for Domenica (a girl he barely knew) to join him in America and become his wife — and, to his great joy, she did!

Wallace, Idaho is one of the first places my grandparents tried to make a go of it in the new world. It’s where my dad Augie was born in 1908 in the Italian section of the infamous Burke Canyon mining camp, just a few miles from the building where I now live. And its where several other families from Val d’ Non (our sacred valley in the foothills of the Dolomites) also came to settle when they came to America. These include the Albertini family, the Fellins, the Branz family, the Voltolinis and other well-known Wallace characters.

Our Zadra Roots in Wallace

For me, at this chapter in my life, I feel a vital connection to my Trentini heritage here in Wallace. There’s something magical about walking the streets of the town where all this family history, dreaming and planning unfolded. I love seeing sepia-tone pictures of my Trentini relatives hanging on the walls in the saloons, or featured in the history videos at the Wallace museum.

The first time I went to Wallace was with my Dad in the 1950’s. At that time, the mines were still going strong, and so were the four brothels on Cedar Street and the more than 20 Wallace honky-tonks where the miners relaxed, played poker and raised hell on Saturday nights.

In the summers during my teenage years, I would go to Albi’s Gem bar on 6th St. in Wallace with my Dad. The Gem was proudly owned and operated by Dad’s distant cousin George Albertini (the father of Seattle Trentino club member Angelo Albertini). I loved George because he apparently thought the drinking age in Wallace was 15, and he would tell non-stop stories about the lives of the Silver Valley Italians until the bars closed down at 2:00 a.m. I never saw my Dad laugh so hard as when George was holding court and telling stories of the “Dagos” in the mining camps.

In the 1920’s, for example, the Albertini family ran a gypo silver mine up in the Burke Canyon, just a few hundred yards from the shack where my Dad was born. (See the picture below). The official name of the mine was “The Haywire”, but so many Italians worked there, that the locals called it the “Dago Queen.” Note the 50-gallon keg in the far right of the picture. According to George and the Wallace Museum, that keg was kept full of whiskey for the Haywire crew. 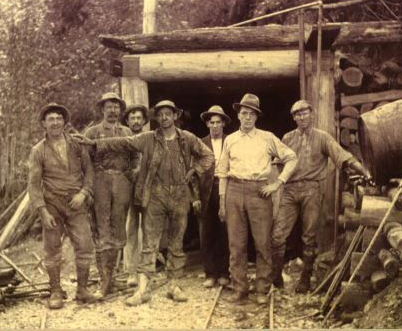 I invite all members of the Seattle Trentino club to come and visit me for a weekend in Wallace so you can connect with the spirits of your Trentini forefathers and mothers. If you have ever visited the rolling hills and mountains in the Italian Tyrol, you will see immediately that the little town of Wallace is nestled in almost identical terrain. I’m sure our Trentini forefathers and mothers felt right at home in these mountains.

We’ll jump in my jeep and I’ll take you for a ride up the Burke Canyon to see the remnants of the famous Hecla Silver Mine, and the ghosts of the old mining settlements like Burke, Black Bear and Gem.

We’ll say a prayer together at St. Alphonsus Catholic Church where so many Italians in this area were baptized, married and eventually buried.

I’ll take you on a 28-mile drive on the old stage coach road into the mountains to visit Pritchard and Murray, the site of one of the last great American gold strikes. We’ll check out Wyatt Earp’s gold claim and have a cold beer at the Bedroom Saloon, the oldest continuously operating tavern (and former bordello) West of the Mississippi.

And when we get back to my place in Wallace, I’ll feed my cat Primo, and then treat you to some hard cheese, salami and a bottle or two of my best home-made Zinfandel. Call first, but come as you are. Times a-wasting.